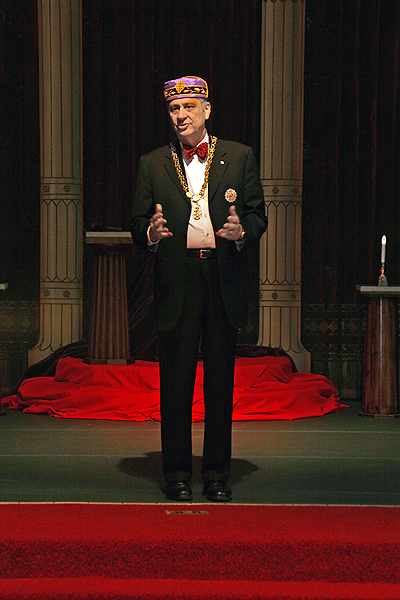 Have you ever wondered what makes Reunions so special? In the Scottish Rite, its Brotherly Love… and much more.

An idea conceived of over a year ago, came to fruition in Charlotte over the weekend when The Orients of North and South Carolina held the first Grand Cross Reunion of the Carolinas on April 15th – 18th 2009. Ill. William B. Brunk and Ill. Michael D. Smith devised a way to bring our Orients even closer together as well as Honour our Grand Cross recipients. Scottish Rite Masons from the fourteen Valleys in the Carolinas came together to Confer all Twenty-Nine of the Degrees on one hundred and two Candidates. This is a benchmark for our Orients, never before has a Reunion of such great significance been attempted! Ill. Allen Hardy was tasked as Chairman, and set to work organizing committees.

After weeks of practicing, sound upgrades, meal planning, hotel planning, and more planning of every kind! (the time had finally arrived) On the Friday before all this was to take place, Ill. Hardy had to be hospitalized for some tests! You are probably thinking – Oh No! But, guess what happened? The Brethren all pulled together and put on a wonderful Reunion! and ILL. Hardy was able to join us on Saturday!

We received our Grand Masters, Honorees, SGIGs and visiting SGIGs under clanking swords and pounding gavels. There were more than fifty Knights of St. Andrew from around the two states, Inspectors General Honorary in tuxedos, and everyone was waiting with baited breath. Then the time came to receive the Grand Commander, and after some powerful remarks, Ill. Ronald A. Seale paid homage to Ill. Col. Arthur R. Datnoff, (G.C. of SC – deceased) with a very touching Memorial. Handmade gavels were presented to the Grand Commander, the SGIGs of NC & SC, the Grand Masters of NC & SC and our Grand Cross, by Bro. Wayne Millis 32KCCH (who made them in honour of this occasion).

In attendance, we had eight SGIGs! Enough to Open the Supreme Council! (We think thats the first time ever that that has happened, outside of Wash., DC of course!)

We are entirely confident in stating that a few individuals could have slipped by without grabbing a name tag (members running late who were part of a degree team, then left immediately after the degree work had concluded). Therefore, with that assurance, we can state, that in fact more than 500 Brothers attended the first Grand Cross Reunion of the Carolinas during the course of the four day event!

ILL. Jim Martin G.C., was the keynote speaker at the banquet on friday evening, and gave an inspiring talk about the Scottish Rite. ILL. Martin attended the ENTIRE Reunion, watched most of the Degrees and assisted Ill. Brunk and Smith in a special ending to the 32nd Degree, when Fathers and Sons received their Black Caps (there wasnt a dry eye in the house).

Brotherhood? It was in great abundance in Charlotte this spring, we met some new Brothers and made some new friends. Now they are talking about the next one! (give us a few days to rest first)

What makes a Scottish Reunion Special? You do… We All Do!
Pictures

Every 3rd Tues Each Month